PAST MEDIA NEWS AT EVENTS

May 12 2012 –  I have been asked by a Sydney film director to advise and work on a future air war movie which will be filmed in Australia and to be based on the Korean War. I am been asked to provide technical, aviation and flightgear knowledge. My flightgear collection may also be used in the movie.

I attended the popular HARS airshow with my flightgear display collection with much interest by the public in my collection. I also shared a lot of and information and explained how flightgear worked.

I attended the first Ingham Wings and Wheels event in North Queensland, where a selection of aircraft and cars were on display. Made many new contacts and had a flight in a UH-1B Huey during a reenactment of a Vietnam CSAR pilot rescue mission with a T-28 also flying above. I am shown here after my flight with Huey pilot Don Blanch, with me wearing a USAF 1960s Vietnam era pilot gear set up. I also took a WW2 US Navy pilot gear set to pose with a US Navy WW2 era TBM Avenger warbird during the 2 day event. Thanks to Dons brother and Leroy for the photos. 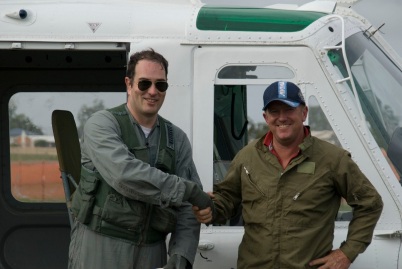 I attended the new aviation event, COCKPITFEST AUSTRALIA in Melbourne. Along side other military cockpit collectors and aviation enthusiasts we all chatted. The day went well attracting around 50 people. Planning for 2012 will now begin.

1 April 2011
At RAAF Richmond, a special 90th Annviersary Gala Ball  was held to celebrate the RAAF 90th Birthday. I had being invited to the event to showcase my heritage flightgear and educate people on preserving history. I hope it will make some people think and become more interested in maybe forming some kind of “base museum”.

28 Feb 2011
During the HARS airshow on 27 Feb 2011, i was interviewed by 2 local newspaper photo/journalists regarding my heritage flightgear displays. Hopefully these 2 interviews will help spread the word about aviation heritage / collecting flightgear more.

19 Feb 2011 – I am donating to the HARS Museum (www.hars.org.au) located at Albion Park south of Sydney, a few bits of flightgear for their WW2 Catalina warbird project.
In colobration with a few people i know who have worked on the project,  i am in the future agreeing to donate 2 x WW2 era headsets as used / worn by pilots/aircrew..

This donation will help enable the Black Cat HARS team to ensure the legacy of the Catalina is able to grow and show the general public at airshows and events, what the 1940s era Catalina crew wore in flying.